skip to main | skip to sidebar

All Fun And Games

So I took a little break from my daughter's birthday posts to share my baby shower cake, not to mention spending a few days sick in bed. Who, I ask, gets strep throat in the summer?! It's just not right! Anyway, back to the regularly scheduled post!

For my daughter's 3rd birthday party I had a tough time coming up with new game ideas. I had used so many good ones over her last two parties, such as Pin-the-spot-on-the-ladybug, mouse-hole golfing, guess how many in the bottle, how many words can you make out of her name, 20 questions (Disney character version), bean bag toss, etc.

After much searching (and more nights than I want to admit, falling asleep at the computer), I ended up with a not-so-traditional, Ballerina BINGO and a word game, A to Z Birthday. I had also wanted to play "Grand Performance", which is when the birthday girl dances to some music and everyone else tries to copy her moves! Unfortunately we didn't make it to that game, but I'm not sure Lily would have danced for everyone anyway. LOL!

The A to Z game was very simple. I just made a Word document, added a couple pictures and the letters A to Z with fill-in-the-blank lines. And printed! Tada! 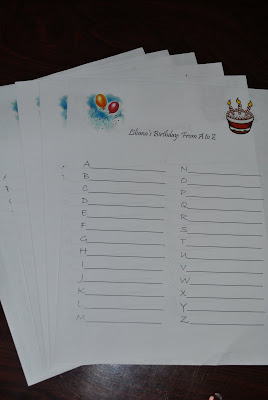 All the guests had to do was come up with a birthday party related word for each letter of the alphabet. The person with the most words wins!

For Ballerina BINGO, I took pictures of my daughter in her ballet outfit, tutu and all. I rearranged those photos, then printed out 15 different BINGO cards, using colors as a guide. I also printed out bigger versions of all the pictures, cut separately, to use for calling. After that, I got out my heavy duty "scissors" (as the hubs coworker calls it), my Silhouette machine and cut out 450 pink and white 1" circles to cover up the pictures when called. I decided the way to win was to get an "L" shape, the whole left column and the bottom row...the "L" standing for Liliana, of course. It was her birthday after all!

Here's how it all turned out... 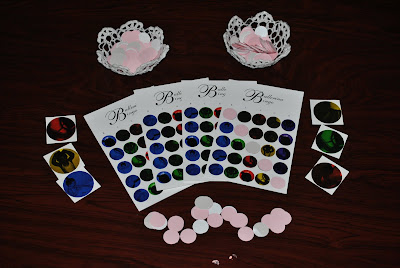 The pictures were a little hard to see. If I did this again (which will probably never happen!) I would lighten all the pictures. 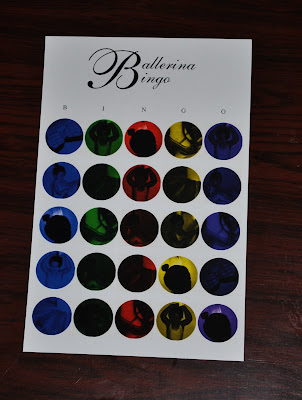 The baskets I made from doilies, using instructions found here. I also sprinkled glitter on them, but that didn't show up in the photo. 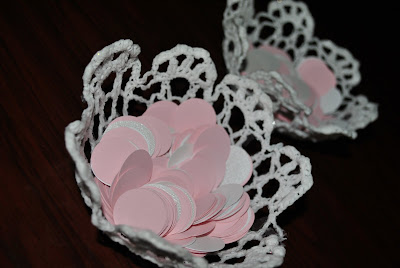 Everyone always has fun playing the games! And when the prizes are pictures of the birthday girl (which will be featured in my next post), it's easy to see the competitive sides come out of the family!
Posted by FrostedFantasies at 9:06 AM No comments:

SO, if you look at Cake Central RIGHT NOW, I am still in the Most Saved! See?! (Fourth from the left!) 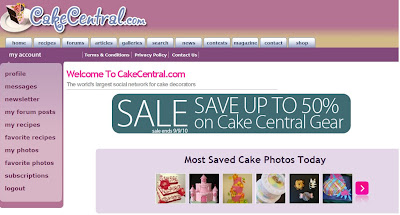 Here's the details...I had bought my adorable baby mold back in January, when I attended the Florida ICES mini classes! So fun! Shortly after, I made my first baby. And it had been sitting in my cabinet since.

But I finally had an excuse to use it! So I sat down and in about 2 hours, made a little bow for her head and a frilly diaper cover up for her booty and then dusted her to give her a more life-like look! This is how she turned out... 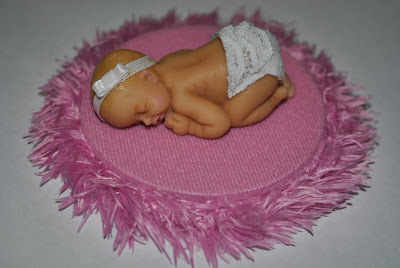 So cute, right?! I know, now you want one, or want to make one. You can buy the mold here and start making your very own baby(ies)!

Well, my sister's friend from high school was having a baby shower (for her 3rd daughter!) and they needed a cake...Jessica to the rescue! LOL...You know I couldn't turn that down! I also now had an excuse to buy a lace mold which I've been wanting for way too long! YAY!

I looked online and found an adorable cake from CC member jardot22 that had a quilt-like pattern wrapped around the bottom of both tiers, so I figured I'd give it a whirl. I cut a bunch of squares the night before and drew/made different patterns on each piece. In the morning, I attached each one to the cake individually. I then added my lace and the quilt and baby on the top. I also wanted to put the baby's name on the top tier. I love how it turned out! 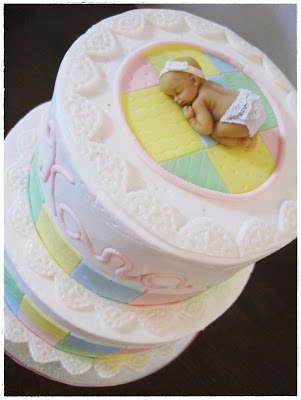 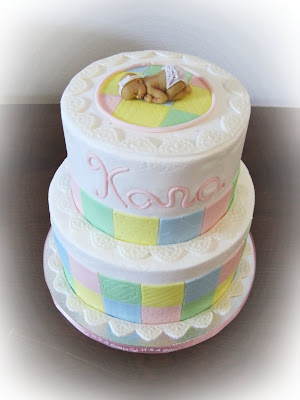 I do wish I could have gotten my buttercream smoother, but other than that I was pretty pleased with it! The top tier (6") was chocolate cake with raspberry jam filling and the bottom tier (8") was a vanilla cake filled with strawberry glaze and fresh strawberries. Delicious...the whole thing was devoured at the shower!

Can't wait to meet your little one!

Posted by FrostedFantasies at 9:34 AM No comments:

Email ThisBlogThis!Share to TwitterShare to FacebookShare to Pinterest
Labels: Cake

Just had to make a quick post 'cause I came home and jumped on the computer for a minute to see this... 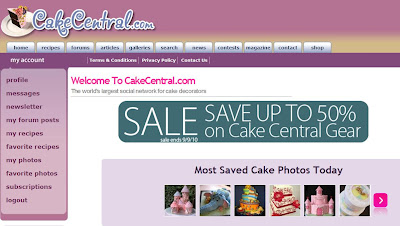 I know it's a little tough to see, but that adorable, pastel, baby cake on the right? That's mine! I made it to the front page of Cake Central! Woohoo!

Oh, and if you want, you can check it out here!

BTW, is there enough exclamation points in this post?! Can you tell I'm excited about this at all?! Heehee!
Posted by FrostedFantasies at 10:02 PM No comments:

FrostedFantasies
Hi all! My name is Jessica. A while back I got my sister cake decorating lessons for her birthday and decided to join her. Well, I liked the class so much, it has become my favorite hobby! I am constantly learning new things and wanting to try them out! And I'm lucky enough to have a very supportive husband who lets me play to my hearts content! I also like crafting, parties,weddings . . . basically anything and everything related to them! Hope you enjoy!